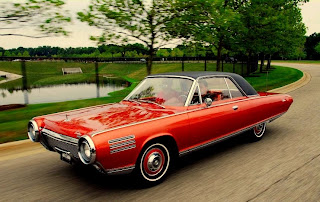 The Chrysler Turbine Car was the first and only consumer test ever conducted of gas turbine-powered cars. Of the total 55 units built (5 prototypes and 50 "production" cars), most were scrapped at the end of a trial period, with only nine remaining in museums and private collections. Though Chrysler's turbine engine project was terminated in 1977, the Turbine Car was the high point of a three decade project to perfect the engine for practical use.

The fourth-generation Chrysler turbine engine ran at up to 44,500 revolutions per minute, according to the owner's manual, and could operate using diesel fuel, unleaded gasoline,kerosene, JP-4 jet fuel, and even vegetable oil. The engine would run on virtually anything with combustible properties and the President of Mexico tested this theory by running one of the first cars—successfully—on tequila. No air/fuel adjustments were required to switch from one fuel type to another and the only evidence of which fuel was used was the odor of the exhaust. 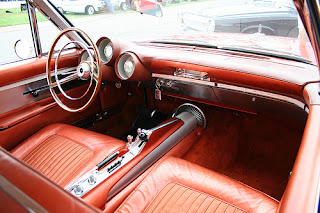 The engine had just 1/5th of the moving parts of a traditional piston-based internal combustion engine (60 rather than 300). The turbine spun on simple sleeve bearings for vibration-free running. Its simplicity offered the potential for long life, and because no combustion contaminants enter engine oil, no oil changes were considered necessary. The 1963 Turbine's engine generated 130 brake horsepower (97 kW; 132 PS) and an instant 425 pound-feet (576 N·m) of torque at stall speed, making it good for 0 to 60 mph (0 to 97 km/h) in 12 seconds at an ambient temperature of 85 °F (29 °C)—it would sprint quicker if the air was cooler and denser. 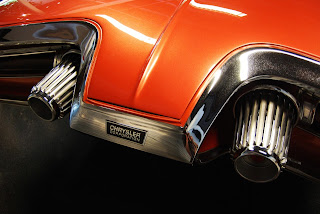 The lack of many moving parts and the lack of liquid coolant eased maintenance, while the exhaust did not contain carbon monoxide, unburned carbon, or raw hydrocarbons. Nevertheless, the turbine generated nitrogen oxides and the challenge of limiting them proved an ongoing problem throughout development.
Posted by The Mopar Man at 3:34 PM