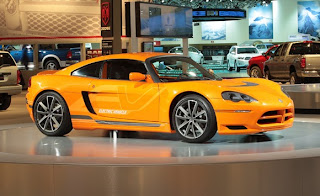 Dodge Circuit EV sports car, was a two-passenger, rear-wheel-drive, all-electric sports car shown to the public at the 2009 North American International Auto Show. The car was based on the Lotus Europa S, and combined a lithium-ion battery pack with a 200-kilowatt electric motor, capable of generating 268 bhp (200 kW) and 480 lbf·ft (650 N·m) of torque. Chrysler claimed that the Dodge EV had a driving range of 150 to 200 miles (240–320 km), approaching the range and performance of the all-electric Tesla Roadster, which is built on the same chassis. According to Chrysler, the Dodge EV could be recharged in eight hours using a standard 110-volt outlet, or in only four hours using a 220-volt outlet, the type commonly used for electric ovens and dryers.
Posted by The Mopar Man at 2:13 AM