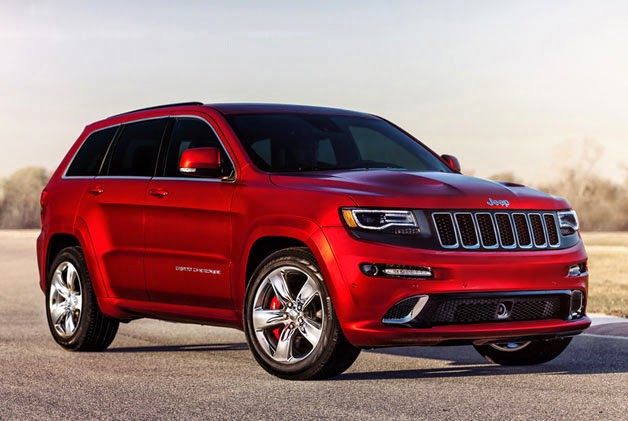 Jeep® Grand Cherokee SRT owners have come to expect – and appreciate – a vehicle that is powerful and refined, luxurious and functional, muscular and stylish. For 2014, Grand Cherokee SRT checks all of those boxes – while also delivering unexpected delights.

Outside, the new 2014 Grand Cherokee SRT sports styling that is even more aggressive than the previous model. Design enhancements for 2014 include a new signature LED character lamp treatment, a brawnier grille, a new, one-touch liftgate and a new rear spoiler.

Inside, Grand Cherokee SRT customers are treated to a new 8.4-inch touchscreen that displays a wealth of SRT-exclusive Performance Pages data. A new launch control button is situated behind the new T-handle shifter on the center console, and a redesigned SRT-exclusive three-spoke, heated steering wheel with more ergonomically efficient paddle shifters, features a host of comfort, convenience and connectivity controls.

The Grand Cherokee SRT features a new Eco Mode for 2014 that optimizes the new transmission’s shift schedule and extends the range of Fuel Saver Technology, which deactivates four cylinders when conditions allow. A button on the center stack allows driver’s to engage Eco Mode for improved fuel economy.

Additional parameters integrated into the control strategy include vehicle speed control, electronic stability control interaction and temperature. The result is automatic shifting that is ideally attuned to the performance requirements of almost any driving demand.

For 2014, the new electronic T-handle shifter provides the flexibility for drivers to choose a transmission shift schedule independent from the Selec-Track system. Drive and Sport shifting can be selected via the T-handle with no effect on the chosen suspension, stability control and driveline torque split settings.

Also new for 2014 is a launch control system that mimics a professional driver’s inputs to optimize Grand Cherokee SRT’s performance by bringing engine, transmission, driveline, stability control, and suspension in line for a textbook launch. Controlled by a button behind the new T-handle shifter on the center console, the result is improved and more consistent straight-line acceleration. The performance experience of the 2014 Grand Cherokee SRT is further accentuated by a change in transfer case proportioning and dynamic controls for the Selec-Track system when the vehicle is in Track Mode. When this mode is selected, 70 percent of the engine’s torque is delivered to the rear wheels for a more pronounced rear-wheel-drive experience. Grand Cherokee SRT drivers will notice a vehicle that is more responsive from
mid-corner to exit.

Software improvements to the retuned Selec-Track system further distinguish the five dynamic modes: Auto, Sport, Tow, Track, and Snow, enabling drivers to choose a vehicle setting that more ideally meets their requirements and ambient conditions. Drivers will find the torque split change in Track Mode provides a vehicle that is more responsive from mid-corner to exit and one that delivers faster lap times at their favorite track.

Aggressive and functional exteriorThe Grand Cherokee SRT sports exterior styling enhancements for 2014. Its signature,
seven-slot upper grille with black screen insert has been shortened and is flanked by slimmer, adaptive, bi-xenon headlamps that are surrounded by a signature LED character lamp treatment. The grille itself is brawnier and the headlamps feature a unique black background to distinguish SRT from other 2014 Jeep Grand Cherokee models while further accenting their jewel-like appearance.

The new styling also enabled designers to incorporate the headlamp washers into the headlamp housing for the first time – rather than on the bumper – for a cleaner more functional appearance.

Also new for 2014 is a more aerodynamically efficient rear spoiler integrated into the all-new, one-touch liftgate that features a new SRT badge that no longer carries the engine cylinder number reference. Rather than relying on a manual lever, the liftgate is operated electronically with the push of a button. For 2014, the flipper glass has been eliminated, greatly enhancing rearward visibility and reducing weight.

Race-inspired and high-performance interiorThe most significant interior enhancement on the 2014 Grand Cherokee SRT is the new Uconnect 8.4AN radio touchscreen. The 8.4-inch display shows a wealth of SRT-exclusive Performance Pages, including recent track times, lateral acceleration, 0-60 mph times and much more. All data is shown in full-color and can now be shared with other SRT enthusiasts via a built-in 3G connection.

The same screen accommodates Uconnect Access Via Mobile, an all-new feature that makes its debut. With it, customers can stream their favorite music into the vehicle using the acclaimed apps Aha, iHeart, Pandora and Slacker.

On the center console, drivers will find a new, leather-wrapped T-handle shifter for the eight-speed transmission that allows the driver to select two driving modes including Drive and Sport.

The new steering wheel is designed and positioned to provide optimal view of the new gauge cluster that now features a 7-inch, full-color, customizable instrument display. This new screen allows drivers to select from a multitude of layout and information to be shown in the center of the gauge cluster.

Enhanced security, convenience and occupant safetyUconnect Access is all-new to the Grand Cherokee SRT. Enabled by embedded cellular technology, the system affords direct communication with local 9-1-1 service personnel at the touch of a button – no waiting for go-between call-center operators.

In addition, the 2014 Grand Cherokee SRT showcases advanced safety features from Forward Collision Warning – which alerts the driver to rapidly approaching traffic – to Blind-spot Monitoring and Rear Cross Path detection, which aid drivers when changing lanes or in
parking-lot situations.

“We’re very happy with the long list of product and quality accolades the Jeep Grand Cherokee has earned,” said Doug Betts, Senior Vice President – Quality, Chrysler Group. “But the most important feedback comes from customers telling us what they’d like to see improved. We are constantly looking at feedback and responding with improvements.”

Key upgrades for the new 2014 Jeep Grand Cherokee lineup include an eight-speed automatic transmission to improve performance and fuel economy plus the newest Uconnect system that balances advanced technology and connectivity features with easy-to-use controls and voice commands.

From the driver’s seat, everything the driver sees, touches – and even speaks to using voice commands – is enhanced to increase function, connectivity and responsiveness. Not only does it work better, it looks better packaged in more premium materials and elegant graphics. This includes a redesigned steering wheel that is optimized for driving position while also providing control buttons for frequently used features like radio, cruise control, phone and voice-activated commands. Customer feedback helped designers and engineers determine the ideal location for fingertip controls so that drivers could comfortably keep their hands on the wheel and eyes on the road.

Another significant interior change for Grand Cherokee is the availability of the new Uconnect Access 8.4AN touchscreen. Connectivity and touchscreens involve rapidly changing technology and ever-increasing consumer expectations – both of which have a significant impact on the overall quality assessment of new vehicles. The Uconnect team constantly evaluates consumer feedback, placing a high priority on designing systems that are intuitive for both tech-savvy customers as well as tech-averse drivers who prefer hard knobs to adjust the climate or radio station.

For the past two years, the Jeep Grand Cherokee has earned the title as the Total Quality leader for the medium-size SUV segment by Strategic Vision. The honor is based on new vehicle owner surveys that holistically assess consumers’ good and bad experiences with their new vehicle. Similarly, the Jeep team values all comments from customers – especially feedback that leads to enhanced quality and customer satisfaction.

Manufacturing: Built in DetroitThe new 2014 Jeep Grand Cherokee SRT is built at the 3-million-square-foot Jefferson North Assembly Plant (JNAP) in Detroit, which has been the site of Grand Cherokee production since its introduction in 1992. To meet consumer demand, a third crew of 1,100 workers was added at JNAP in the fourth quarter of 2012.

SRT Track ExperienceOwners of any Chrysler Group SRT vehicle receive one day of professional driving instruction as part of the SRT Track Experience, designed to maximize their driving knowledge and skills on the street or track. Sessions are held throughout the year at selected tracks. For more information, visit http://drivesrt.com.

The SRT lineup in the 2013 model year features five vehicles that are world-class performance contenders and bring the latest in safety technologies and creature comforts. The Chrysler 300 SRT8, Dodge Challenger SRT8 392, Dodge Charger SRT8 and Jeep Grand Cherokee SRT8 are joined by the SRT flagship Viper and Viper GTS models, which are making their highly anticipated return to the high-performance sports car market.
Posted by The Mopar Man at 10:26 PM