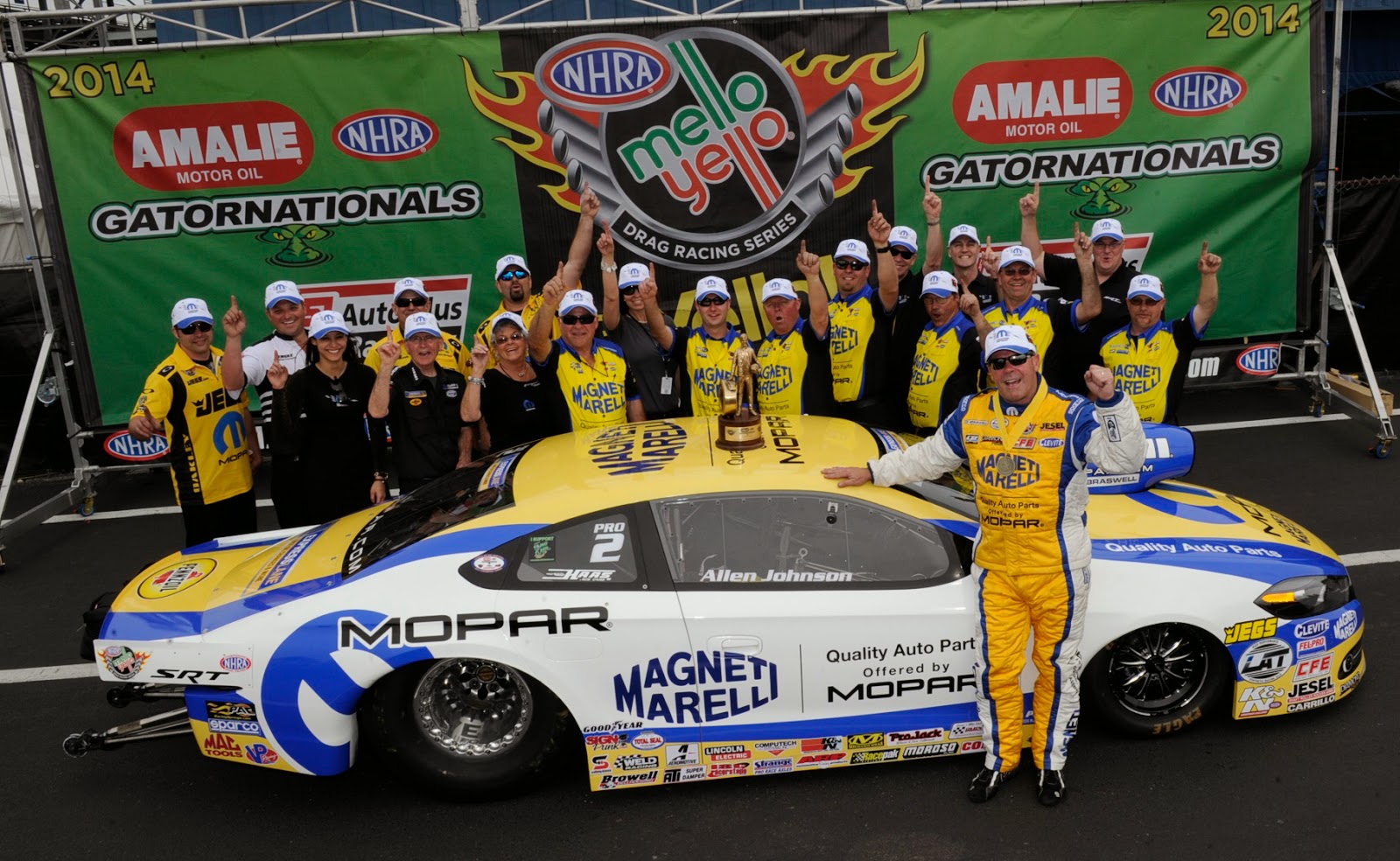 March 16, 2014 , Gainesville, Fla. - Allen Johnson had boldly predicted that the new Mopar Dodge Dart NHRA Pro Stock car will ultimately rank among the greatest to compete in the class — and it looks like the Team Mopar veteran might have a bright future as a prognosticator.  In the vehicle’s competition debut Johnson wasted no time in igniting a winning legacy for the Dodge Dart, powering to a history-making event win at the 45th Annual NHRA Gatornationals in Gainesville, Fla.

Johnson also captured his second consecutive NHRA Gatornationals crown and his 22nd career win in 47 final-round appearances en route to become the first Pro Stocker to drive a Dodge Dart into Victory Lane. The win is also the Greeneville, Tenn., native’s second in a row this this season —Johnson raced his Dodge Avenger to a farewell victory at the recent NHRA Phoenix event before christening the Dodge Dart in triumphant style.

“Congratulations to Allen Johnson for taking the new Magneti Marelli Offered by Mopar Dodge Dart straight to the winner’s circle in its debut to earn the prestigious Gatornationals title,” said Pietro Gorlier, President and CEO of Mopar, Chrysler Group’s service, parts and customer-care brand. “What a fantastic way to demonstrate the quality of Mopar products and team work. To defend his title, earn consecutive wins and take the early lead in the championship points makes us very excited about the future of the Dodge Dart and Allen’s bid for another NHRA Championship amid some strong competition.”

In the maiden race for his Dodge Dart, and the first with “Magneti Marelli Quality Auto Parts Offered by Mopar” as his primary sponsor, Johnson qualified No. 4 and recorded his fastest career run with a speed of 214.04 mph. He navigated a nail-biting route to the semifinals, tracking down rookie Jonathan Gray in the first session of eliminations after Gray recorded a near-perfect reaction time. Johnson used a 6.559 second /211.83 mph run to catch Gray (6.593/209.98) just past the 1,000 ft. mark.

Johnson’s Dodge Dart veered sharply left in the quarterfinals as he fought the machine down the strip, however, opponent Shane Gray encountered even more trouble on his way down the quarter-mile, and Johnson was able to reel in his ride for a winning 7.414/149.88 pass. Johnson showed that the new Dodge Dart is ready for prime time in the semis, unleashing a 6.569/211.79 to knock off top qualifier Dave Connolly (6.583/211.20). In the money round Johnson demonstrated that the driver is just as important as the car, leaving first with a quicker .017-second reaction time to score a holeshot win over Erica Ender-Stevens, despite a 6.566/211.73 pass to her quicker and faster 6.551/211.96.

“What a great job the Mopar engineers, everybody at Chrysler Group, Dodge and SRT did,” said Johnson, the 2012 NHRA Pro Stock champ and 2013 series runner-up. “I just can’t say enough. For the last two weeks since the Phoenix win, it’s been nonstop. My guys haven’t had a day off. It says a tremendous amount about our crew, and the engineering efforts behind it (the Dart).

“Everything to do with the design of the Dart, the engineers took our input and really came up with a great car. To be able to do that (win in its first race) is a huge accomplishment.”

After posting his fastest speed ever (214.62) mile per hour during qualifying in the debut of the Mopar/JEGS.com Dodge Dart, defending NHRA Pro Stock series champ and No. 3 starter Jeg Coughlin Jr. bested Rodger Brogdon in the opening round, reaching the finish line first with a 6.550/211.89 paired with a .019 reaction time.

Coughlin’s reflexes were even quicker in the quarterfinals, leaving on Vincent Nobile with a .015 reaction time compared to his opponents slower .021. Unfortunately, the 6.591/211.69 pass by Coughlin wasn’t enough to overcome Nobile’s quicker 6.580/210.60 at the stripe.

The Pro Stock points leader entering the NHRA Gatornationals following two runner-up finishes to start the season, V. Gaines slipped to No. 2 after Gainesville.  His 6.571/211.79 in his Dodge Avenger (Gaines will take delivery a new Dodge Dart body shortly) couldn’t match the 6.535/212.59 laid down by Enders-Stevens in the quarterfinals.  Mopar-powered Dodge driver Matt Hartford drew Connolly in the first-round, where his day ended.

No. 6 qualifier Ron Capps was forced to take out two fellow Mopar-powered Dodge Charger R/T drivers in the first two rounds, sending home Jeff Arend to start Sunday on the strength of a 4.132/308.14 run. In a showdown of Don Schumacher Racing (DSR) teammates, Capps’ Dodge (4.136/307.16) came out on top in the quarterfinals, with No. 3 starter and Mopar Dodge pilot Jack Beckman (5.844/121.34) dealt the loss. Facing Robert Hight with lane choice in the semifinals, Capps saw his hopes for a Gatornationals triumph go up in smoke early, smoking the tires and slowing to a 7.663/89.63 as Hight pulled away to a 4.168/301.20 winning pass.

Next up for NHRA Mello Yello Drag Racing Series Team Mopar competitors is the NHRA Nationals in Las Vegas, Nev., scheduled for March 28–30.
Posted by The Mopar Man at 12:53 AM