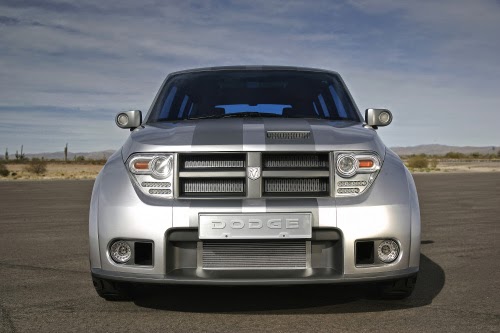 Rallye-ready and eager to go, the new Dodge Hornet concept vehicle is designed to bring to the B-segment market a unique blending of European sensibility regarding engine size and overall footprint with an American flair for aggressive attitude and flexible interior space.
"We wanted the Hornet to be dynamic, nimble, fun to drive, and have an adaptable space-efficient interior," said Mark Moushegian, Principal Exterior Designer. "At the same time we set out to create a vehicle with a uniquely American character to expand the image and presence of the Dodge brand in Europe and international markets, especially in the entry-level market."
"We went for a rallye-inspired look — robust, capable, and most definitely not 'cutesy.' We wanted a distinct 'edge' to the design. We especially wanted to push the envelope of interior volume. That's why the Hornet is almost as wide as a C-segment vehicle," Moushegian continued. Consequently the Hornet's chunky, wheels-to-the-corner silhouette imparts the fun of assertive motoring to even the most mundane of errands.
With its wide stance, the Hornet is solidly planted on the road. Up front, the signature Dodge crossbar grille is set above an exposed engine intercooler flanked by front brake air ducts and fog lamps. The raised plateau on the hood features a recessed scoop on the driver's side to funnel air to the engine air box. Underhood is a 1.6L 16-valve OHC supercharged I/C four-cylinder engine putting out 127 kW (170 hp)/224 N•m (165 lb.-ft.) of torque @ 4000 rpm. 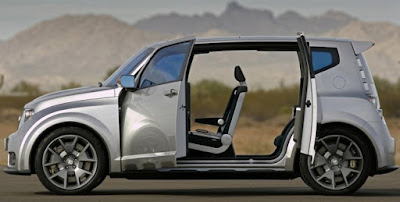 The muscular side view is dominated by the large 19-inch diameter open-section aluminum wheels designed to show off the "mechanicals," including the gold-colored brake calipers. The arching wheel flares and notched sill are complemented by curving body surfaces that "spear out" into the full front and rear opposed half-doors which, in section, are quite shallow so as to maximize the interior space. The framed doors open to reveal the absence of a B-pillar, while the three-window side glass terminates in a dynamic wedge-shaped quarter window.
Inspired by the look of fashion sunglasses, all the glass in the vehicle, including the oversize sunroof, is rendered in a deep "Blue View" tint which contrasts vividly with the car's Liquid Silver exterior.
"The idea is that the car would be available in a limited number of colors," Moushegian said. "The customer selects the contrasting glass color of his or her choice as an accent." Inspired by the legendary Dodge Viper, dual "skunk stripes" in Beryllium Gray boldly traverse the hood, roof, overhanging rear defuser wing and the liftgate, including the "sky view" sun roof which offers a panoramic outlook overhead for both front and rear passengers.
Set in matte metallic gray tiered bezels and grouped under clear covers, all exterior lamps share a common "mechanical" style vocabulary that features prominent circular elements plus "triple orange slice" front and rear turn signals. Similar repeater lamps are set into the side mirrors which also incorporate auxiliary rallye lamps. The circular theme is reprised by three-inch diameter dual exhaust tips propelled through the rear chin spoiler.
"Like the exterior, the interior is geared around young rallye enthusiasts," said John Sodano, Principal Interior Designer. "Our intention was to maximize the interior volume by pushing all interior surfaces to the perimeter of the vehicle as much as possible. I studied images of space capsule interiors, since they are designed for high efficiency in a limited space. I wanted the Hornet inside to have a functional, 'engineered' look, but with pleasing surfaces and materials." 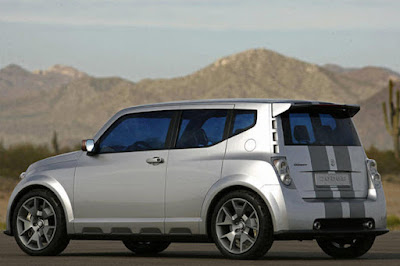 Extreme flexibility also is central to the sporty interior. The space-saving foam seats are exceptionally slim but comfortable, with the striking satin-silver finished aluminum framing deliberately exposed. Seat bolsters are covered in a smooth, black urethane-coated fabric while a black, fine-woven textured Pique cloth is used on the cushion and back inserts. Belts are integral with the seats.
Good-looking as they are, the seats' real beauty lies in their adaptability. Both the passenger front bucket seat and the 40-60 three-passenger rear seats fold forward and collapse to the floor to provide a flat load bed. To facilitate this, the headrests fold forward to stow between the seat back and cushion. The cabin floor is covered with an attractive and durable honeycomb-texture rubber.
In addition, the rear seats also flip rearward to stow in back, flush with the liftgate sill. This position provides for the highest possible vertical storage behind the front seats. When upright, the rear seats track rearwards to provide an additional 225 mm of legroom for rear seat passengers. Accessible to passengers regardless of the fore-aft seat position, overlong grab bars are mounted high on each rear quarter and also serve as clothes hangar racks.
The crisp black and slate gray interior is designed for both style and utility, with surfaces having a disciplined, space-saving planar look. The driver's door trim panel, for example, contains a first aid kit, open storage bin, and a closed case with carrying handle that can be removed from the car. The passenger door boasts both open and closed bins plus a longer open bin with bungee cords to retain stowed items. All bins are removable and can be easily rearranged to suit each customer's requirements. Moreover, the designers envision the Hornet as a vehicle that can be easily customized through the purchase of add-on exterior and interior parts and accessories, allowing owners to personalize their cars to express individual needs and desires. 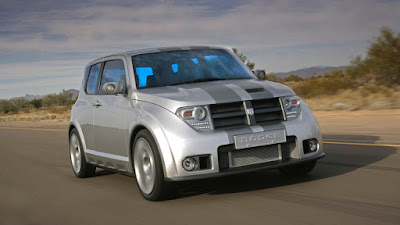 Both front doors also have a hinged storage pocket just above the remote handle. The driver’s side rear door contains a handy beverage cooler while the door opposite boasts a fold-out table module. On all doors, cloth-covered armrests with integral pull cups are underlined by narrow satin silver moldings while side air bags are concealed in the Pique cloth bolsters.
Designed to accommodate both left- and right-hand drive, the modular instrument panel features twin horizontal Pique cloth wrapover pads divided by a satin silver center stack topped by a fixed navigation screen with non-glare glass. The pads front shallow open storage trays directly ahead of the driver and front seat passenger, with storage for smaller items provided in divided bins below. The center stack also accommodates large, easy-to-use entertainment and heating, ventilating and air-conditioning system controls whose circular elements mimic the exterior lamp detailing, "because," explains Sodano," we sought to create a common style architecture for the exterior and interior." Ten spherical speakers in varying sizes are supplied in the cabin, two on each front door and three on each quarter panel.
The three-circle, six-gauge delta-shaped instrument binnacle with attached hood moves with the steering column while the steering wheel itself features a textured, molded rubber rim and three "tuning fork" spokes that echo the exterior wheels. A freestanding cantilevered center armrest "floats" over the front floor console, pivoting downward to permit unfettered access to the six-speed manual shift lever during aggressive driving.
Tough, brash and eager to be off, the Dodge Hornet concept vehicle brings to the competitive entry-level B-segment market an ideal combination of American fun and European function.