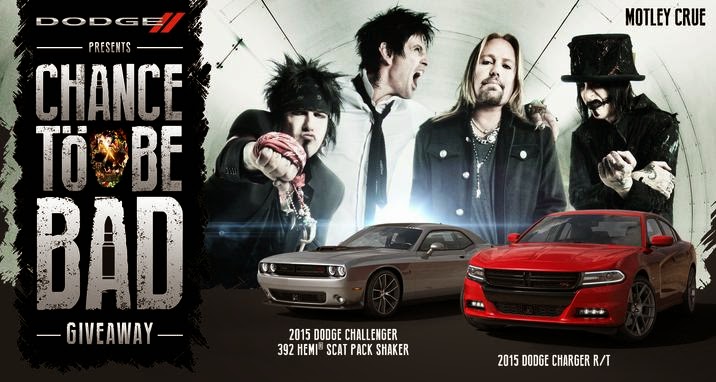 April 22, 2014 , Auburn Hills, Mich. - Muscle car enthusiasts and rock ‘n’ rollers looking for a chance to be bad need to look no further as Dodge and Mötley Crüe launch a nationwide promotion.

The “Dodge Chance to Be Bad Giveaway” kicks off this week as part of the partnership between Dodge and the iconic rock ‘n’ roll band, as Mötley Crüe embarks on its “Final Tour.” The Dodge brand is the presenting sponsor of the tour, which kicks off July 2 in Grand Rapids, Mich.

Fans have an opportunity to win a 2015 Dodge Charger or Challenger, an ultimate Mötley Crüe VIP experience that includes meeting the band, and other prizes, including autographed guitars, band collector’s items and tickets to the notorious rock band’s “Final Tour” this summer.

“The 2015 Dodge Charger and Challenger are the ultimate American muscle cars just as the much anticipated Mötley Crüe ‘Final Tour’ is the ultimate high octane music event of the summer,” said Tim Kuniskis, President and CEO, Dodge Brand, Chrysler Group LLC. “The ‘Chance to Be Bad Giveaway’ gives our mutual fans an opportunity to win prize packages that are just as irreverent as our new muscle cars and the band itself.”

The nationwide promotion utilizes the Dodge and Mötley Crüe digital and social media outlets to build excitement and give fans many ways to vie for the large prize pool. Participating Dodge dealers and regional business centers as well as the band are also promoting the giveaway.

Registrants entering at www.dodgechancetobebad.com can earn five more chances to win by sharing custom links with their friends across Facebook, Twitter, Pinterest, Google+ and LinkedIn.  Qualified registrants will also receive an exclusive offer to test drive a new 2014 Dodge vehicle at their local dealer and receive Mötley Crüe concert tickets when they do.

In addition, fans of the Dodge Facebook page will be invited to like and comment during a weekly wall contest to enter to win a package of exclusive Mötley Crüe collector’s items.

The “Dodge Chance to Be Bad Giveaway” is open to legal residents of the 50 United States and the District of Columbia, who are 18 years of age or older and have a valid driver’s license. Sweepstakes concludes July 1, 2014. Complete rules and additional information are available at http://dodgechancetobebad.com/rules.aspx.


Dodge has used the band’s hit single “Kickstart My Heart” in three 30-second commercials for the Charger and Challenger as the energy of the song and band captures the spirit and energy of the brand.  “Uncle,” “Dream Job” and “Engine Note” can be seen on the brand’s YouTube channel.

About Mötley Crüe and ‘Final Tour’
Hailing from Los Angeles, the quartet—Vince Neil (vocals), Mick Mars (guitars), Nikki Sixx (bass) and Tommy Lee (drums)—has commandeered the rock pantheon for over 30 years. In that time, they have accumulated worldwide album sales exceeding 80 million, seven platinum or multi-platinum albums, 22 Top 40 mainstream rock hits, six Top 20 pop singles, a star on the Hollywood Walk of Fame, three Grammy nominations, four New York Times bestsellers (including the band’s biography, THE DIRT) and countless sold out tours across the globe, playing to millions of fans. Mötley Crüe was the first rock band in history to have completed an epic sold-out Las Vegas residency at The Joint at Hard Rock Hotel & Casino.

Mötley Crüe announced The Final Tour and the band’s ultimate retirement, solidified when the band signed a formal Cessation of Touring Agreement, effective at the end of 2015, in front of global media in Los Angeles on Jan. 28.  The band has proven they know how to make a lasting impression and this tour will be no different: fans can expect to hear the catalog of their chart-topping hits and look forward to mind-blowing, unparalleled live production.  “When it comes to putting together a new show we always push the envelope and that’s part of Mötley Crüe’s legacy,” explains Nikki Sixx (bass).  “As far as letting on to what we’re doing, that would be like finding out what you’re getting for Christmas before you open the presents.  We think in an age of too much information, we’d like to keep some surprises close to our chest until we launch the Final Tour.”

For a list of tour dates and more information on the tour, go to http://bit.ly/MotleyCrueTheFinalTour.


About Dodge Brand
The Dodge brand is tearing into its centennial year with a keen eye focused on the future and a desire to create vehicles customers want to drive and are proud to park in their driveways. With 100 years of history, Dodge is building on the technological advancements of the '30s and '40s, design evolution of the '50s, the racing heritage of the '60s, the horsepower of the '70s, the efficiency of the '80s and unbelievable styling of the '90s as it paves the road to its future. New for 2014, Dodge is kind of a big deal with its new 2014 Dodge Durango with a new eight-speed transmission that delivers up to 25 miles per gallon (mpg) on the highway, a new 8.4-inch Uconnect infotainment center and best-in-class power, towing and driving range, in addition to its class-exclusive technology. The new Durango joins a stable that includes the new 2014 Dodge Dart, with its breakthrough 2.4-liter 184-horsepower Tigershark engine, and the celebrated 2014 Dodge Avenger. Both earned 2014 Top Safety Pick status from the Insurance Institute for Highway Safety (IIHS). Also new for 2014, Dodge is bringing back the legendary throwback Shaker hood and offering special 100th anniversary editions of the Charger and Challenger with unique exteriors and interiors to celebrate the centennial. Completing the 2014 Dodge lineup are the Journey with its new Crossroad model and the 30th Anniversary Grand Caravan. The Dodge lineup features five vehicles with best-in-class power, seven vehicles that deliver 25 mpg or higher, three vehicles that deliver 31 mpg or higher and three vehicles that offer seating for seven.
Posted by The Mopar Man at 5:06 PM