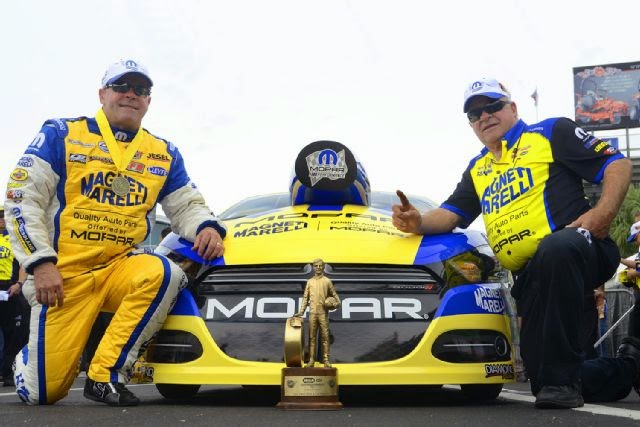 Pro Stock No.1 qualifier, Johnson took his “Magneti Marelli Offered by Mopar” Dodge Dart through the eliminations ladder to advance to his third final round appearance of the 2014 NHRA Mello Yello Drag Racing Series season. He defeated Greg Stanfield, Jonathan Gray and Vincent Nobile on route to a final elimination match-up with the second seeded Eric Enders-Stevens.

However, Johnson can’t help but come away from the weekend feeling positive about the runner-up finish. After consecutive wins at Phoenix and Gainesville national events, the last two race weekends leading up to the team’s arrival in Houston were slightly more challenging as the Johnson & Johnson crew worked to collect data from the two new Dodge Darts and find the consistency needed for success in the hotly contested Pro Stock category this season. The benefits of those trials now seem to be paying dividends both Johnson and teammate Jeg Coughlin Jr.

“We can’t be too disappointed with our weekend,” said Johnson who remains second in the Pro Stock points standings behind Enders-Stevens. “I think we’ve got a better handle on the Dart. We have something really good to work with on both cars and we actually made some good progress today with Jeg (Coughlin Jr.) car. Jeg really made improvements today and had a chance to be in the finals with me. Between the tune up and the motors and this humidity and these new cars we made a lot of positive progress this weekend.

“Erica (Enders-Stevens) was fast all weekend and we were right there with her but today was her day. I feel like we’ll be fighting it out all year long.”
Coughlin’s day started on a positive note as he disposed of opponents Greg Anderson and Dave Connolly with the help of strong reaction times to advance to his semi-final match up against Enders-Stevens where, for a second consecutive national event, the JEGS.com Mopar driver had a -.004 red-light foul ruin his bid for a final round appearance.

"I felt fantastic behind the wheel," Coughlin said. "I was .005 first round and .012 second round, and I was set up somewhere between .002 and .010 for that run and must've got it all again. Little bit unnecessary, quite frankly, to set up so tight but we'll make some adjustments. We've got two weeks off, so we'll be ready to go for Atlanta."

Coughlin’s semi-final appearance contributed to boosting the defending NHRA Pro Stock Champ from ninth to seventh in the standings.

After starting the season with a pair of runner-up finished, V. Gaines didn’t quite have the kind of debut the team had hoped for their new HEMI-powered Dodge Dart. Gaines saw his day end prematurely with a loss in the opening round to Jonathan Gray who beat him on a hole shot with a 0.014 to 0.075 second reaction time and 6.645 (209.82 mph) to 6.642 (211.06 mph) elapsed time run.

In contrast, Don Schumacher Racing Funny Car pilot Jack Beckman had his strongest weekend of the 2014 season thus far. Beckman drove the Infinite Hero Foundation Dodge Charger R/T to his best qualifying effort of the year securing the No.2 seed on the eliminations ladder. He defeated Terry Haddock and Cruz Pedregon to move on to a semifinal round match up against his Mopar teammate Ron Capps.

After enduring two previous defeats to Capps this year, Beckman took the round win with a 4.485-second pass while his teammate hazed the tires. The win, however, came with some drama as the race car failed to make the turn at the top end of the race track and slid into barriers causing front end damage to the vehicle but the DSR crew was able to have Beckman’s Dodge Charger R/T ready to run in their first final round appearance since St. Louis last autumn.

Capps, for his part, met all three of his DSR teammates on Sunday, defeating Matt Hagan and Tommy Johnson Jr. before meeting up with Beckman.

For Hagan and his Mopar Express Lane crew, the next event can’t come fast enough.

"We got it figured out just a little too late," said Hagan who is looking to bounce back from a fourth first round loss of the season. "It's been a tough year so far for this Rocky Boots/Mopar team. We've only had one strong race at the beginning at Pomona that we went some rounds. That just leaves our team hungry and we'll just keep digging and working hard and put a W on the board real soon. The guys are positive and we're ready for Atlanta like it's tomorrow."

There will be a three week break in the 2014 NHRA Mello Yello Drag Racing Series schedule before racing resumes May 16-18 at the 34th annual Summit Racing Equipment NHRA Southern Nationals at Atlanta Dragway in Commerce, Georgia.

Mopar Brand
Mopar (a simple contraction of the words Motor and PARts) was trademarked in 1937 with the launch of an antifreeze product but truly made its mark in the 1960s during the muscle-car era. From Mopar Performance Parts to enhance speed and handling for both road and racing use, the brand soon expanded to include technical service and customer support.

Mopar parts are unique in that they are engineered with the same teams that create factory-authorized vehicle specifications for Chrysler Group and FIAT vehicles – a direct connection that no other aftermarket parts company can provide. A complete list of Mopar accessories and performance parts is available at www.mopar.com.

Mopar-first Features
Mopar has introduced numerous industry-first features including:
Posted by The Mopar Man at 1:32 PM