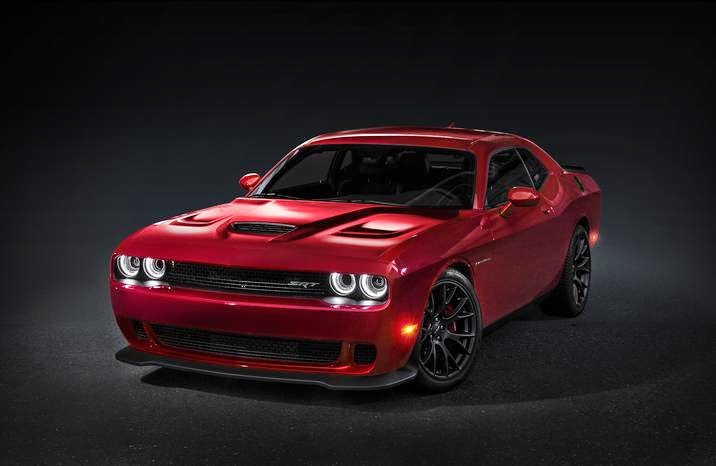 July 25, 2014 , Auburn Hills, Mich. - Dodge announced today that it will auction the 2015 Dodge Challenger SRT Hellcat VIN0001, the most powerful and fastest muscle car ever built, during theBarrett-Jackson Las Vegas 2014 auction, which will be held Sept. 25-27 at the Mandalay Bay Hotel and Casino in Las Vegas. Proceeds from the auction on Sept. 27, will benefit the not-for-profitOpportunity Village organization of Las Vegas.

The one-of-one special-edition 2015 Dodge Challenger SRT Hellcat, with a 6.2-liter supercharged HEMI® V-8 engine and 0001 vehicle identification number (VIN), has an NHRA-certified quarter-mile time of 10.8 seconds at 126 mph, 707 horsepower and 650 lb.-ft. of torque on tap right from the assembly line. Adding to the exclusivity, the donated muscle car will be the only Dodge Challenger to ever have a Viper-exclusive Stryker Red exterior - hand-painted at the Dodge Viper paint facility - and it will include special Hellcat badging, specific VIN documentation and one-of-a-kind memorabilia.

“The 2015 Challenger Hellcat is already guaranteed to be one of the hottest cars that will roll through the Barrett-Jackson auction lanes in decades to come,” said Tim Kuniskis, President and CEO, Dodge and SRT Brands, Chrysler Group LLC. “The VIN 0001 being auctioned this year is the ultimate one-of-one collectible 2015 Dodge Challenger, as Dodge is ensuring there will never be another one like it.”

The 2015 Dodge Challenger SRT Hellcat VIN0001 has a class-exclusive TorqueFlite 8-speed paddle shift automatic transmission with RPM matching downshifts, 15.4-inch Brembo front disc brakes with two-piece rotors and six-piston calipers, the largest brakes ever offered by Chrysler Group, and 20-by-9.5-inch wheels of lightweight matte black forged aluminum. It will have newly designed interior trimmed in premium Black Laguna leather on performance-oriented seats, a modern dash layout providing all of the technology features one would expect and an authentic forged-aluminum supercharger plenum cover under the hood.

Barrett-Jackson is waiving all bidding and consignment fees, so 100 percent of the sale price will be donated to Opportunity Village, a not-for-profit organization that serves people with significant intellectual disabilities in the Las Vegas area. A prototype 2015 Dodge Challenger Hellcat will be on display at the Dodge booth located in Hall 3 during the second annual Hot August Nights Auction presented by Barrett-Jackson from July 31 to Aug. 2 at the Reno-Sparks Convention Center.

“With 707 horsepower, the 2015 Dodge Hellcat is more than just the most powerful muscle car built by an American manufacturer,” said Craig Jackson,Chairman and CEO of Barrett-Jackson Auction Company. “It’s also going to be the means to help countless people with severe intellectual and related disabilities reach their potential.  We’re honored that Dodge chose our 2014 Las Vegas auction to sell Hellcat VIN001 to support Opportunity Village. Not only will the wonderful people at this organization benefit from the sale of this muscle car, but the winning bidder will own a truly amazing piece of American automotive history.”

“We are so unbelievably thankful for the support of Dodge and Barrett-Jackson,” said Linda Smith, Associate Executive Director, Opportunity Village. “We are touched by their amazing generosity and support of our mission here to support individuals with disabilities by giving them the chance to lead independent and fulfilling lives.”

About the Barrett-Jackson Auction Company
Barrett-Jackson, The World’s Greatest Collector Car Auctions™, was founded in Scottsdale, Ariz., in 1971. Its internationally renowned auctions are hosted in Scottsdale; Palm Beach, Fla.; Reno/Tahoe, Nev., and Las Vegas. The events feature hundreds of the world’s most sought-after, unique and valuable vehicles where they cross the block in front of a global audience. For more information about Barrett-Jackson, and complete event information visit www.barrett-jackson.comor call (480) 421-6694. Barrett-Jackson can be found on Facebook or followed on Twitter @Barrett_Jackson.