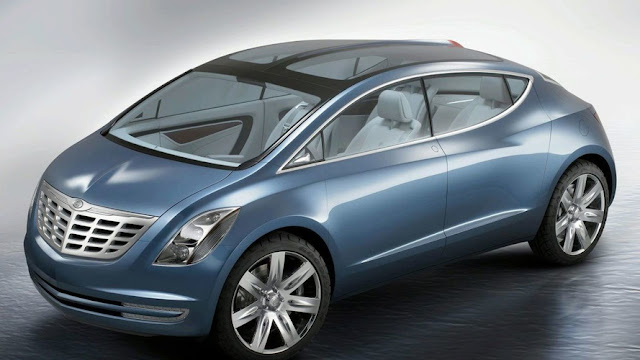 Detroit January 14, 2008 - Chrysler’s concept for 2008, the ecoVoyager, marries an elegant American design with fuel cell Range-extended Electric Vehicle technology.
“The 2008 Chrysler ecoVoyager concept vehicle celebrates the romance of automobile travel embodied in a four-door, four-passenger, distinctively American automobile of spirited design,” said Greg Howell, principal ecoVoyager concept exterior designer. “While the ecoVoyager’s supple, flowing one-box shape is purposely designed to achieve aerodynamic efficiencies, it also pushes the Chrysler brand language in a new direction of ‘elegant simplicity,’ by taking full advantage of the space normally occupied by a bulky conventional powertrain setup to drastically reduce the front overhang.”
Featuring crisscrossing forms defined by hard lines with fluid intersections, the style vocabulary of the ecoVoyager embodies Chrysler’s harmonization of functional technology with beautifully-styled exteriors and interiors.
The Chrysler ecoVoyager concept was developed for customers wanting a travel experience on par with a private jet, but without a lot of fancy gadgetry. These customers seek three critical attributes: elegance, simplicity and serenity.
Chrysler ecoVoyager Concept TechnologyThe all-new Chrysler ecoVoyager’s wheels are driven by an electric motor, with power primarily supplied by a lithium-ion battery pack capable of satisfying a consumer’s typical daily commute of less than 40 miles.
The electric motor develops 200 kilowatts (268 horsepower), enabling acceleration from 0 to 60 mph in less than eight seconds. A regenerative braking system captures energy that would normally be lost and returns it to the battery, making the Chrysler ecoVoyager concept a very efficient and spacious vehicle.
The ecoVoyager takes advantage of a range extender – in this case, a small, advanced hydrogen fuel cell -- to extend the vehicle range for occasional long trips. With this advanced technology, the Chrysler ecoVoyager’s total range is greater than 300 miles, while no emissions—besides water vapor—come from the tailpipe along the way.
With the entire propulsion system located below the ecoVoyager’s floor, space is maximized for utility of passenger and cargo.
Chrysler ecoVoyager Concept ExteriorExpressive details of the Chrysler ecoVoyager concept include panoramic roof glass bisected by a center spine, tight body overhangs and a dramatic boat-tail back end. The sinuous shapes of the window graphics, headlamps, taillamps and grille openings are inspired by Chrysler’s storied winged badge.
The curving trapezoidal shape of the ecoVoyager’s grille is echoed by the clear lens-covered shadow box that houses the rear license plate. The sloping backlight features a similar shape, emphasizing the repeating harmony of the ecoVoyager’s design elements.
Other exterior touches on the Chrysler ecoVoyager concept include the elongated, flaring “light catchers” on the lower doors and the front and rear fascias, enhanced by the Polar Ice exterior color.
Finally, side doors open a wide 90 degrees. Since the rear doors are hinged at the rear and there is no center B-pillar, entrance into the ecoVoyager is virtually unimpeded.
Chrysler ecoVoyager Concept InteriorBy placing the front wheels of the Chrysler ecoVoyager concept farther forward than usual, designers were able to create greater interior roominess and increased legroom, especially in the rear seats.
In the ecoVoyager’s spacious interior, the size, design and location of all controls have been rethought to provide its four pampered passengers the luxury of having every feature within effortless reach.
“In some ways, true luxury is in not having to reach or search around for controls,” said Ty Stump, principal interior designer of the Chrysler ecoVoyager concept. “With the new ecoVoyager concept, we carefully placed the gauges and controls in order to reduce head and eye movement. We also achieved simplicity in the interior forms, both for visual elegance and to avoid distracting surfaces.”
The ecoVoyager’s windshield defroster and cabin air-conditioning outlets in the instrument panels and doors, for example, are invisible beneath a recessed perforated mesh. This avoids visually-disruptive array sliding vanes and protruding knobs. Even the color of the interior—soft Dove Gray with warm cherry wood accents—is designed to promote a relaxed ambiance.
The Chrysler ecoVoyager’s unconventional instrument panel features a broad, leather-covered angled surface, slightly V-shaped in plain view and fronted by a full-width display screen set just below the windshield. The left and right outer ends of this non-glare screen contain the side-view mirror image, while a third camera image in front of the driver serves as the rearview mirror.
Unlike most instrument clusters, only currently-needed information is displayed, designed to be viewed above the steering wheel rim rather than through it (and requiring less up-down eye movement and refocusing). The front-seat passenger can view a movie without its moving images disturbing the driver. A slick, slide-out/retractable center console—fitted with hot-key buttons and a mouse pad—replaces the functions contained in a conventional vertical center stack.
The ecoVoyager’s four individual chairs are contoured for personalized comfort. The seat framing is exposed, with under-seat storage drawers. Front seats have individual cantilevered, adjustable armrests containing the window controls and heat/massage switches, while individual rear-seat armrests fold into the cabin back panel. With the ability to store six 20-ounce bottles, the floor console dividing the rear seats accommodates hot or cold beverages.
A recessed area in the headliner between the two longitudinal skylights contains the “Direct Sound” function. With this feature, the musical entertainment choice of each individual occupant can be directed to him or her without the use of headphones, and without disturbing others in the car.
Sleek, refined, efficient and superbly comfortable, the Chrysler ecoVoyager concept vehicle offers a new experience in stress-free travel.
Posted by The Mopar Man at 9:55 AM