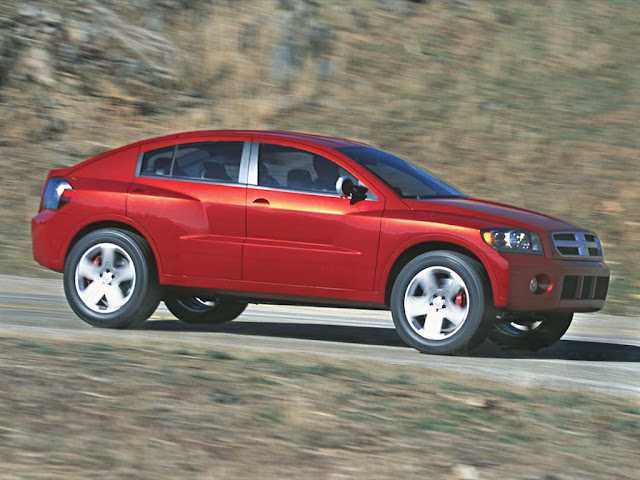 Detroit January 6, 2003 - The design thesis: merge European rallye car performance and style with some of the convenience and capability of the American sport-utility vehicle.
The result: the Dodge Avenger concept.
The Adrenaline Red Pearl-colored Avenger, unveiled at the North American International Auto Show in Detroit, gives American drivers the rallye car style and performance usually seen only in video games. This high-tech passion and performance is packaged in a real-life vehicle that is robust and capable enough to get occupants into their own adventures far removed from the video screen.
"In Europe, rallye cars are known for their tough levels of durability no matter what the conditions are," said Trevor Creed, Senior Vice President - Design, Chrysler Group. "In North America, such vehicles are usually seen only in video games. But why limit someone who has an active lifestyle or just appreciates a vehicle with similar capability to something the size of a traditional SUV?"
Dodge Avenger delivers as easily on the streets of New York City, Detroit and Chicago as on the back roads of Vail, Napa Valley or Cheyenne.
Although based on the European rallye coupe formula, the Dodge Avenger has four doors, consistent with the "do more" philosophy of the Dodge brand. Visually, Avenger stands out with taut lines that track around precise, robust surfaces and accentuate the protective quality of the overall design.Its body nestles between muscular, rallye-inspired fenders, providing a capable, powerful stance. Performance and street smarts combine to give Avenger the agility and size of a passenger car -but with the strength and stance more associated with the SUV market.
Dodge Avenger has a wide track, full fenders and a unique fastback profile to showcase its agile all-wheel drive capability. The rear doors open 90 degrees for better ingress and egress and allow for both occupants and items, such as skis, a mountain bike or just groceries. At the rear, a hatch-style liftgate enables a level of versatility for any owner to indulge his or her active lifestyle.
The details of the Dodge Avenger concept echo a boldness that resonates with the overall design theme of capability, functionality and stability - but with a sense of style and polish. Features accentuating the vehicle's style include a satin silver mirror ring to silver exhaust tips, black head lamp bezels including perforated faces, and silver head lamp cans with amber LEDs which permeate through."On the interior, one of our designers described the vehicle best by simply saying that there's nothing fuzzy about it," said Creed. Avenger's interior is finished off with "New Formula" materials that are unexpected - right down to the textured vinyl flooring.
With its robust proportions, modular graphics, metallic accents, and carpetless floor, the Dodge Avenger's interior creates a high-tech athleticism that reflects the strength of the exterior, while providing a cockpit-like environment for the driver. The styling is purposely sparse as a true rallye-inspired car but detailed in silver and black accents to provide a clean yet punctuated setting.
Four independent seats hug the occupants in a protective exo-skeleton structure featuring four-point built-in safety belts that resemble racing harnesses. A center console area features armrests for comfort, but maintains utilitywith see-through storage bins. The active, outgoing image of Dodge is further highlighted through the integrated "boom box" in the lift gate.
Avenger's all-wheel-drive powertrain consists of a 3.5-liter V6 and an A604 automatic transmission. Gearsare changed not with a standard stick shifter, but with steering wheel-mounted paddles to enable quick, direct and smooth transitions and response.
"The Dodge Avenger Concept delivers all-wheel-drive capability wrapped in a contemporary, versatile package that real people can use everyday," Creed concluded.
Dodge Avenger Concept Vehicle Key Specifications
Length: 187.2 inches (4,754 mm)
Wheelbase: 113 inches (2,870 mm)
Width: 72.3 inches (1,836 mm)
Height: 63.6 inches (1,616 mm)
TrackFront: 61.2 inches (1,554 mm)Rear: 61.2 inches (1,554 mm)
TiresFront: 265/55R20-inch; wheel size: 20-inches x 9 inches, outer diameter - 31.5 inchesRear: 295/50R20-inch; wheel size: 20-inches x 10 inches, outer diameter - 31.6 inches
Posted by The Mopar Man at 10:09 AM