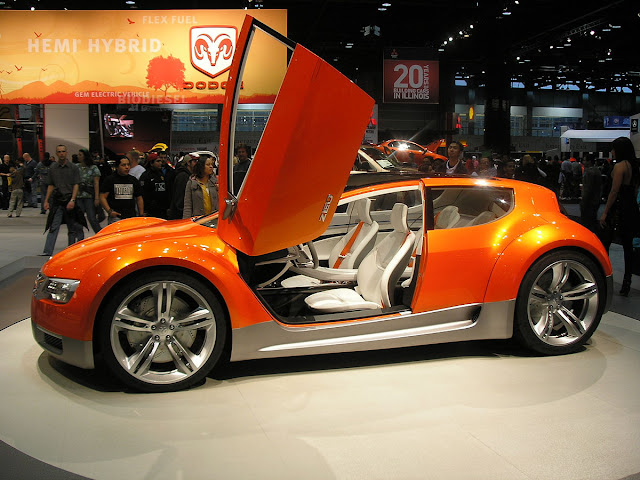 Battery Electric Vehicle technology in expressive “2+2” Dodge sports car style
Detroit January 14, 2008 - The 2008 Dodge ZEO—Zero Emissions Operation—concept vehicle is a four-passenger, all-electric, “2+2” sport wagon that embraces the bold, emotional characteristic of the Dodge brand. With its 23-inch wheels-to-the corners, heroic proportions and muscular forms, the ZEO exhibits a new youthful breed of muscle-machine interface.
Dodge owners and those who will desire the ZEO concept are unquestionably driving enthusiasts. They are less family-oriented, with a desire for things that are high-tech, and place less emphasis on pure practicality. While they boast environmental and overall responsibility, they also exhibit a “need for speed.”
“The Dodge ZEO concept is designed to break the paradigm of what an electric car should look like,” said Bill Zheng, Dodge ZEO principal exterior designer. “An electric car can be as expressive as any gasoline-powered vehicle. The Dodge ZEO concept proves that point, and then some.”
To this end, the ZEO’s body has been given an active, three-dimensional form, with the fenders boldly offset to the body.
Dodge ZEO Concept TechnologyThe advanced propulsion system powering the Dodge ZEO concept is electric-only with a 64 kilowatt-hour lithium-ion battery pack capable of at least 250 miles.
Resting in a rear-wheel drive layout, Dodge ZEO’s 200 kilowatt (268 horsepower) single-electric motor contributes to a 0-60 mph time in less than six seconds, which rivals Chrysler’s famed HEMI powerplant.
Unlike other such vehicles, ZEO is a four-door, four-passenger vehicle that delivers function as well as environmental responsibility.
Dodge ZEO Concept ExteriorNestled between the robust circular wheel arches, ZEO’s taut, elongated beltline ends with the signature Dodge kick-up at the rear, where the reverse-angle C-pillar is planted directly over the rear wheel arch.
Inspired in part by the architecture of a Möbius strip, Dodge ZEO’s rakish A-pillars curve into extended roof rails that twist and converge as they race rearward. The windshield glass continues in an unbroken, curving plane nearly to the rear of the car, giving both front and rear passengers an unimpeded, all-around view while showcasing ZEO’s inventive interior.
Other expressive details include “scissor” doors, front and rear lamps treated as separate sculptural forms, and the “ZEO Orange” and dark silver exterior.
“The lit crossbar grille,” says Zheng, “is designed to communicate the use of electricity as the ZEO’s power source.”
Dodge ZEO Concept InteriorInspired by organic forms and wireless technology, Dodge ZEO’s interior is loaded with attitude and intelligence expected by youthful buyers.
“The Dodge ZEO concept is an example of designing for people who are used to a dynamic lifestyle and who are surrounded with information and virtual friends at all times,” says Lou Gasevski, principal interior designer of the Dodge ZEO concept.
The entire cabin is treated as if it were a single piece of sculpture.
A broad sloping fabric-wrapped surface in front of the driver curves dramatically into the door and quarter panel. It then sweeps around the back panel to the opposite side quarter and door, ending in a sloping surface in front of the passenger.
This design approach blends the usually separate-looking parts of the interior into a unified whole. A narrow strip of blue LED accent lighting on the doors and quarters lead to the back panel, adding to the sweeping effect. Most of the interior surfaces of the ZEO concept are colored in Super White, adding to the sculptural impression.
A slim center console slopes down from the windshield of the Dodge ZEO, creating a dual-cockpit effect. It then levels off to divide the cabin by continuing clear to the back panel. To avoid visual clutter, customary controls and a viewing screen are set flush with the surface.
Instead of a conventional instrument panel, the steering wheel, column and instruments are treated as a single freestanding design element. The Dodge ZEO concept’s steering wheel has two vertical spokes, set closely together, leaving 80 percent of the rim “open” for maximum visibility. The laid-back center hub, containing the driver air bag and auxiliary switches, is stationary, with the wheel rim revolving around it. Left and right horizontal paddle-levers just behind the wheel rim activate the remote radio functions.
The sloping plane of the center hub, which cantilevers forward above the steering column, houses the instruments which are displayed on a thin blue acrylic viewing screen set directly in front of the driver. The entire elegant multi-piece ensemble adjusts with the wheel rim to the driver’s needs.
Doors and quarters are bisected by a flaring, wide-to-narrow dark gray panel separating the upper and lower surfaces—with the lower portion of the door and quarter curving inboard to provide an armrest surface. Milled aluminum door pull handles, placed diagonally, act as accents.
Contrasting colored Copperhead stitching follows the forms of the ZEO’s Super White leather seats. For maximum comfort, the four bucket seats sport highly-contoured bolsters on the seat cushions and backs. When in the down position, the slim sculpted headrests nestle neatly into the tops of the upper seatbacks. The seat shells are constructed from milled aluminum, with video screens integrated into the front seatbacks.
With its bold exterior and curving, sculptural interior, the ZEO concept appeals to Dodge brand customers who want value, expressive design and useful technology.